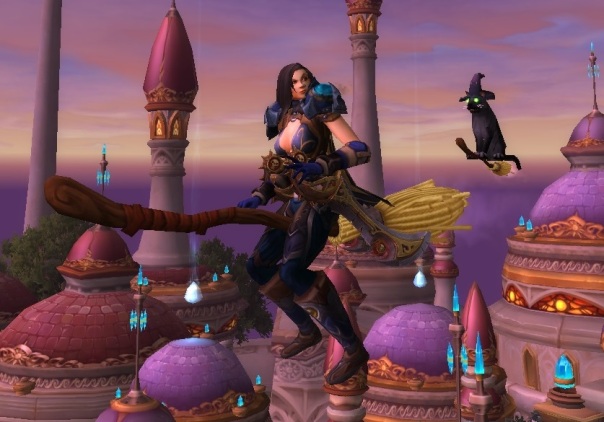 UGH, you feed them ONCE….

For anyone who is not already well aware, I play World of Warcraft. I play a lot, I take some breaks (sometimes for years), then wander on back.

This Wandering Rogue actually plays a rogue in WoW, and they are in the midst of their Hallow’s End celebration – collect enough Tricky Treats and trade them for prizes. It’s an event designed to break up some of the monotony for seasoned players who may be getting a little bored, and while I don’t usually have time to do EVERYTHING an event has to offer, I decided to spend a little time collecting a couple of the more fun items. 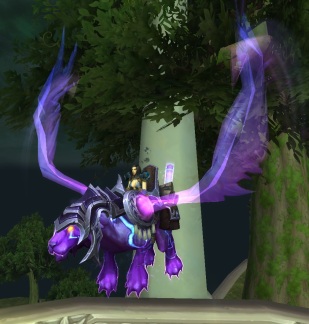 How does this even work? Who knows, it just DOES!

As you can tell, I traded in my first batch of Tricky Treats for that sweet broom! As a Harry Potter fan, it’s a nice addition to my collection of mounts (aka cars/planes but with cooler looks… check out one of my favorites – an oversized purple cat with ethereal wings to the left!), and I’ve seen more than one suggestion from other players for games of Quiddich. The only downside is that I can only use the broom during the Hallow’s End event (so about 2 weeks each year around Halloween).

But honestly, even more than that, I was excited to trade my second batch for the Feline Familiar, which as you can tell sports an adorable pointy witch hat. When standing on the ground, it follows you around like any other cat, but unlike most other companions, when you are mounted up, the Familiar ALSO mounts up on it’s own little broom and zooms after you while you fly!  Again, the downside is the broom is only seen during the Hallow’s End events.

But for now I will enjoy zipping around on my pseudo-Firebolt with my adorable little kitty pal while I can!